Leah Remini is shooting a TV series about Scientology

We figure it’s about time that we revealed what we’ve known for some time about upcoming television projects that feature Scientology, because it’s getting really interesting.

We’ve known for more than a year that a television series about Scientology’s disconnection policy has been in production, and that it has run into pushback by the church. (You may remember an earlier story about Karen de la Carriere receiving a threat letter from Scientology, even though she’s not involved in the production of the series.) We actually know quite a bit about this series, but we’ve done a little consulting work for the company producing it, and we’re not at liberty to tell you much about it.

But what’s especially exciting for Scientology watchers is that the same network is also developing another series, also about the way Scientology rips apart families, and this one is being produced by former Scientology celebrity Leah Remini. We broke the news in 2013 that Leah ditched Scientology, which she had grown up in. The King of Queens actress came out with a bestselling memoir last November, Troublemaker, with juicy anecdotes about what it was like to be a celebrity in a celebrity-obsessed church.

These are two completely separate projects, and as far as we know they are tackling similar subjects but with different sets of people. We’ve confirmed that Leah’s series is currently shooting footage, and appears to be on a fast track. Could we see both series this coming fall? We really don’t know if that’s going to be the case or not. 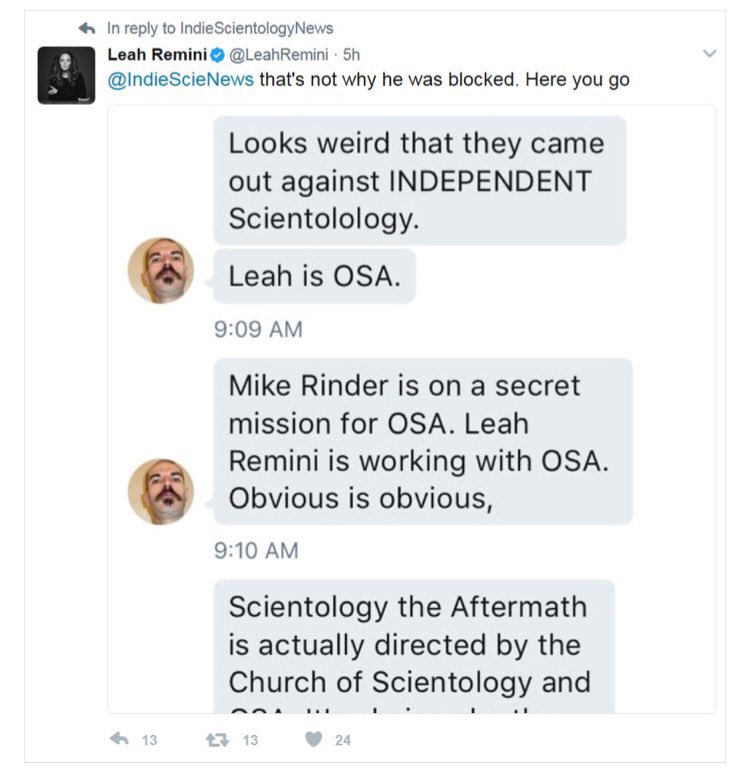 Leah Remini and Mike Rinder are hard at work preparing season 2 of Leah Remini: Scientology and the Aftermath. But in the meantime, A&E wanted to tide you over, and so the team has put together a 2-hour special that will look back at where Scientology has been and how it’s been exposed in the past.

We weren’t involved in the making of this particular special, but we’ve heard some names of some people who might be appearing in it. We’re hoping to confirm that soon. You can fit quite a bit into a two-hour show! As soon as we hear more about what’s in it, we’ll let you know.

The so far untitled episode is scheduled to air on A&E at 9 pm on Monday, May 29, after a marathon airing of Leah’s first season…

My name is Donna Fiore, formerly Donna Remini. I am Leah Remini’s stepmother and have been for more than forty years, since she was five years old. She still is and always will be that to me. I was married to her biological father George Remini for 28 of those years.

George Remini, 69, and his current 36-year-old wife, Dana Connaughton-Remini, recently did a video interview for Scientology badmouthing Leah, (his own daughter) with lies, slander, and more lies. I’m taking this opportunity to refute George and Dana’s totally false and vicious narrative against Leah, as well as those allegations made against me.

I was never involved in any way with Scientology, and during the time Leah and her sister Nicole were members, I always felt it was trying to control Leah in every way possible, as well as trying to separate her from her family. If she and I hadn’t loved each other, our relationship would have never survived. We did, we do, and it has.

Scientologists masquerading as reporters for Scientology’s propaganda magazine, Freedom, have called me repeatedly and then showed up to my home. I never gave them my phone number or address and yet they showed up, unannounced, and have harassed me to give them dirt on my stepdaughter Leah, even offering to fly me to D.C to interview me there.

When I explained to them that Leah was a victim of an abusive and neglectful father (as were his four other daughters) they wanted nothing to do with that information, but continued to try and press me for “dirt.”
Clearly, they have an agenda and it is not an agenda to get the truth.
When I explained to the Scientologist who showed up at my home that I had nothing to say about Leah that could help them, she implied that if I said anything on video for them about Leah that was libelous, the Church of Scientology and its magazine Freedom would cover my legal fees.

They have come to my home seven times in three days. On Saturday, I called the police in hopes that that they would get the message.

For Scientology to go to these extremes says a lot about what this organization is: An organization that knows no bounds to attack its former members.

This is not the work of a legitimate church.

As a child of a broken home — in the 1950’s yet — I empathized with Leah and Nicole going through divorcing parents, getting used to a new woman, and meeting new siblings. It was hard for me and because of that, I took my step-mothering responsibilities seriously. My feelings for them are maternal. Their mother Vicki and I never ever argued with each other in all that time, and we still haven’t. In fact, whenever we do get together, we laugh our asses off.

As for their father, George never had any time for his daughters, and I find his self-serving “poor pitiful me” act sickening.
I left George Remini in 2003, and I also left the state in order to get as far away from him as I could.

As for Dana, although she is younger than George’s own daughters, she is old enough to know exactly what she is doing. She is using Leah’s name to further her own agenda. Dana has met Leah twice in her lifetime; once when Leah flew her and George out to visit with her in California and another when they appeared on Leah’s TLC show. Dana is not Leah’s stepmother. She has never met George’s other daughters nor has she met any of George’s grandchildren. Two are now in college. Not one greeting card, not one call from either of them.

Sofia, Leah’s daughter, has consistently reached out to them over her 13 years of life, and not one email or call has been answered by either of them.

George is a criminal. He is weak, small, petty, greedy, vulgar, crude, a liar, a thief, a user, an abuser and a manipulator of the highest magnitude. And that is being kind.

These are not the words of a bitter ex-wife, but rather the words of a woman who put up with this for close to three decades and finally found my strength to leave.

These are the words of a stepmother who did the best she could do for her stepchildren, and now doing what I always tried to do for Leah and her sisters: to defend them the best I know. I did then and I will do it now.

This is the simple truth concerning George Remini and his wife Dana: Their exaggerations and lies bear no resemblance to the truth.

Wow, did Leah Remini and Mike Rinder finish off their run at A&E with a dynamite special episode last night.

And before we go into specifics, we want to say it again: It seems like a miracle that Leah Remini: Scientology and the Aftermath happened at all. Three full seasons of revelations about Scientology, never shying away from telling things in detail, and trusting viewers to absorb Scientology’s most arcane and most sickening aspects. And last night’s finale episode was no different.

But we want to hear from you about your thoughts after watching the episode. We’ve collected what we felt were the most important things said during the 2-hour episode. Which had the most impact on you, and which do you think will go on and resonate long after this series is gone?